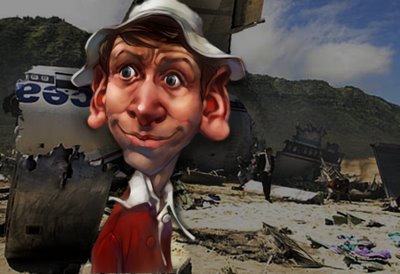 I guess the thing that turned me off to Lost was in the first season when the plane had just crashed and out of nowhere Gilligan made his cameo appearance. I just thought it was in bad taste for a show that was trying to be some kind of drama. Gilligan wandering around all with that goofy smile on his face felt really out of place, I guess he had a concussion from the plane crash but still.

And where was the Skipper?
Posted by David Malan at 3:54 PM

I always thought LOST needed an openning credits sequence like Gilligan's Island. And a song.

Gilligan looks like he's enjoying the lack of TV censorship in the 21st century a little too much.

Hilarious, Dave... and how that I know Gilligan's there, I might as well stop watching the show. They're never getting off that island while he's around. Does this mean that "the others" are the Globetrotters? Probably.