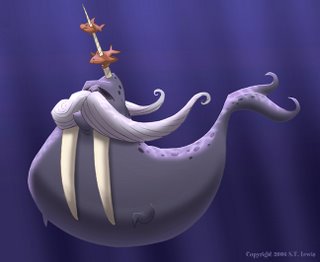 Haha, I love the shapes you've got going on with this one. Those fish on the horn are absolutely wonderful!

I especially like how you really captured the "dead, impaled fish" shapes.

The prissy front fins add a lot to this character. Do you ever color in your lines? The black sometimes seems to get in the way of the color fields.

I color in the outlines sometimes, but I was feeling pretty lazy this time. Maybe I'll do that, though... if I ever get less lazy.

Love the moustache. And the pompous way in which he carries himself.

Ah yes the majestic narwhalrus. During the ice age, when life evolved back to the sea, the horse became the seal while the unicorn became the narwhalrus!

A narwhale's tusk is actually its right front tooth, not a horn on the head as you have so ignorrantly suggested.

This is "narwhalrus," Scott... not a "narwhale." And the tusk on a narwhale is on the LEFT side of it's upper jaw. Man, Scott... your criticism really puts the extra "r" in "ignorrant."

If this is truly a "narwhalrus" as you claim, you would use one of the whalrus tusks as the Narwhale horn, but since you know nothing about sea life...

PS neither whalrus nor narwhale can dive very deep, so this is not a good choice for "creature of the deep"

a better choice would have been a mix between a sperm whale and narwhale.

Is having tusks and a horn redundant? It had to be asked.