It Came from the Deep

As we were fishing off the port of New Evanshire. We were met by the most terrible beast. It came from the deep and measured a stack tall and about two rods in each direction. With a head of a toad, the body of a seal, and tentacles, its mouth steeped with teeth, we lost Jebadiah and Abraham to the beast, while the sea took Ezra. Later that night Avis died in my arms from the Bilious Fever. I may never return to the sea again. 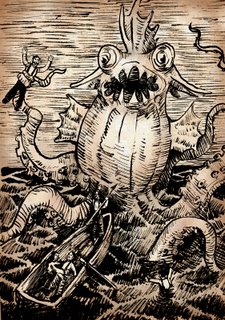 if you ask me it looks rather like a sea monk

I dig the sketch, man. The story with it is hilarious, now you need an illustration of the narrator. Nice job, ADDam!

I never did care for Ezra. I love this, Adam... your story is the coolest, though I certainly mourn your loss. I know one thing - I'm never fishing near New Evanshire.

That is very entertaining. Thanks for the laugh this morning.

Wow Adam I think your multiple personality disorder is actually a plus when it comes to art, it sure helps you take different angles at these topics.
looks great, and don't worry I'm sure you'll go back to see, you said the same thing last time.

This turned out great, Adam! You really captured the look you were going for.

I had such a good time reading your story Adam. The style of the illustration fits the story really well.