Jacque is a French actor; well, I should say was a French actor. See, Jacque’s career started splendidly: after just a couple of successful plays in New York, he got a part in a Disney movie, playing some kind of a conductor/babysitter. Later on, he played an obsessive compulsive in a Pixar production. He even performed on Broadway!
Unfortunately for Jacque, parts for French crustacean started to get sporadic. He tried to move on to TV but without success. He just got one part as an extra in the TV show “Lost”. You could see him scurry past Hurley’s feet at one point…
Now Jacque is drinking all alone at the Triton Café ready to be the victim of a deep, very deep depression.

It’s hard to be a French crab sometimes! 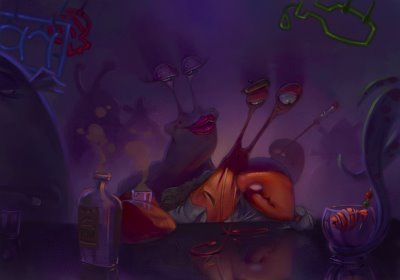 I put a step by step and a little video on my blog for those who are interested.

Great moody lighting. I really like his droopy antennae also.

I forgot to say:

This is really fun. the reflective counter is a nice touch...and the clown fish :)

Wow I really love this piece. Kinda cartoony but has some nice touches of realism. Beautiful!

There is kind of a weird tangent with the two crabs, but the colors, lighting and overall piece are excellent!! Great job!

Pretty cool sebastien! I especially like the little fish drink in the foreground there!

Hehe all your characters have vices. I love it.