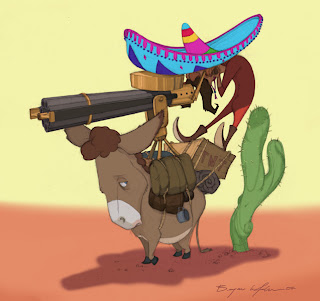 Really cool! That is all I have to say.

Nice! I love the multicolor hat. Also, great sense of anticipation! I sort of wish there was some way to clearly indicate that the flap in the back of his pajamas is open. (I know it isn't now, but maybe it would be better if it was?

Sneaking up on someone probably isn't one of this guy's strengths. I love the size relationships of everything in this. The donkey's hair is nice too... where does he get it done?

Oh man this is soo awesome! I love the line of action on that guy. He looks like he is ready to fire!