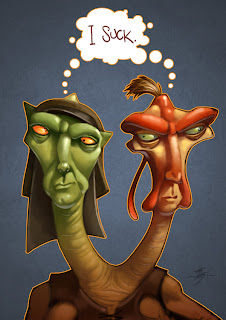 You may remember these/this guy(s) as the commentator for the pod race in Phantom Menace. I hate these guys. The pod race alone offers a lot of stupid characters (mostly those in the background...or Anakin), but these guys take the cake. The only potentially cool character in Phantom Menace is Darth Maul, but instead of randomly entering the movie and decapitating annoying characters like Fode and Beed or Jar Jar, he gets killed in the end by Mister "I have the higher ground" Obi Wan. Weak.
Posted by Kevin Keele at 3:56 PM

Whoa. This picture reminds me why I hate these guys so much. These guys in my favorite movie series---argh!! These guys in one of Kevin's pictures---argh!! In each case, complete destruction of something I like.

Yup. They are stupid all right. You probably made them look too good. That little Mr. Potato-head pod racer who couldn't get his pod going was pretty bad too.

You're right,those guys definitely sucked! Nice job on the colors, you made 'em seem way cooler.

That's funny I love those guys! They were my favorites too, oh wait, this is negative. Well it is very nicely painted anyway.

HahaahaHHAhAH... ok I gotta give it to ya.. they were bad..

...Holy Crap they were bad! Some people complained about Jar Jar but somehow forgot these guys. Great colors by the way.

Oh man - worst character/characters ever! Good call, Kevin. And great re-design... you made them look better than they ever should have looked. Also the way that they're thinking instead of talking makes them a little more bearable.