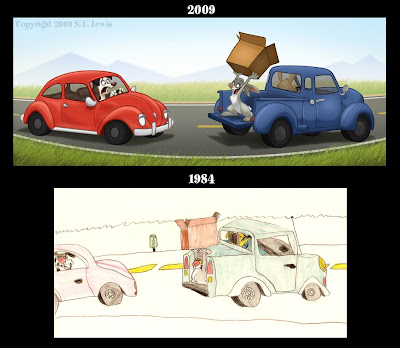 That looks more malicious than careless, still I love seeing these before/after pictures. The question is before and after what. Well whatever significant event happened between these two dates it had a dramatic effect on your art.

I'm guessing it had something to do with meeting me. Your Welcome.

Rabbits are so mean, but I think that dog probably did something to provoke them.

Wow. You could really draw cars when you were young.

Too bad the old drawing can't be elarged!

This is fun! I think a motion blur (or something) on the background and some other elements to hint at top speeds would give it more energy. I love the bunnies expression.

I think there are dalmatian puppies in the box... the rabbits got them for free at the entrance to Wal-Mart.

Thanks for the comments, y'all!

Seems you've gotten better, though judging by the wheel spokes you drew as a kid, your attention to detail has gotten worse.

I kinds liked the old one...

but you are way better at drawing tires now

That's an awesome idea! I'm going home for christmas, and see if I can find some old drawings to re-imagine...thanx! :D